I've just returned from teaching a workshop in Tuscany and I must say it was wonderful!  I had a super group of students who were such fun, the villa was beautiful as was the Tuscan countryside and the organization of the workshop was outstanding.  Thank you to Art Travel Italy who did such an amazing job.  I'll post some pics here to give the flavour of the workshop: 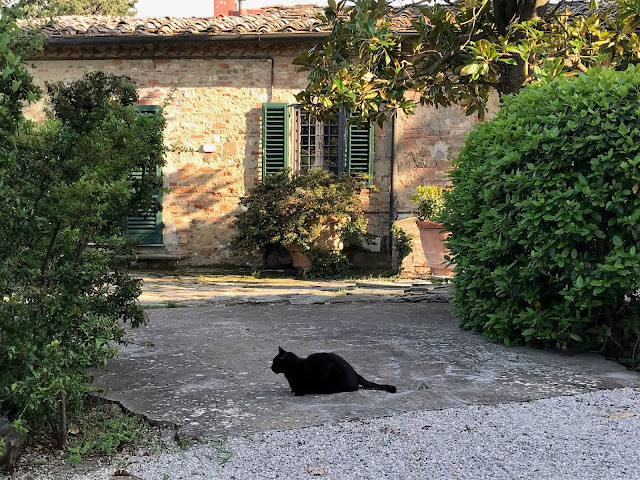 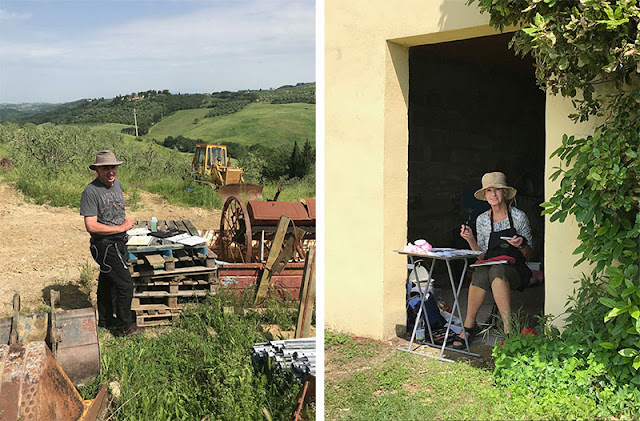 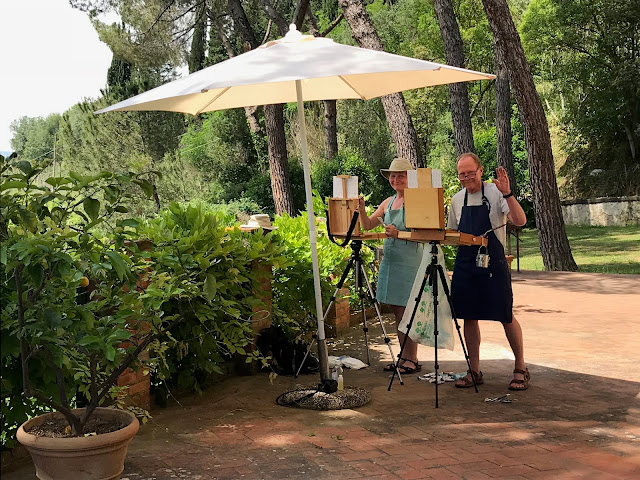 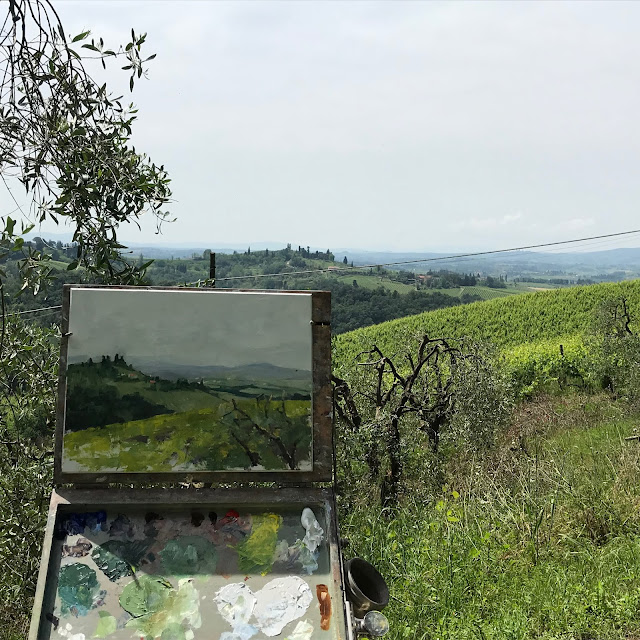 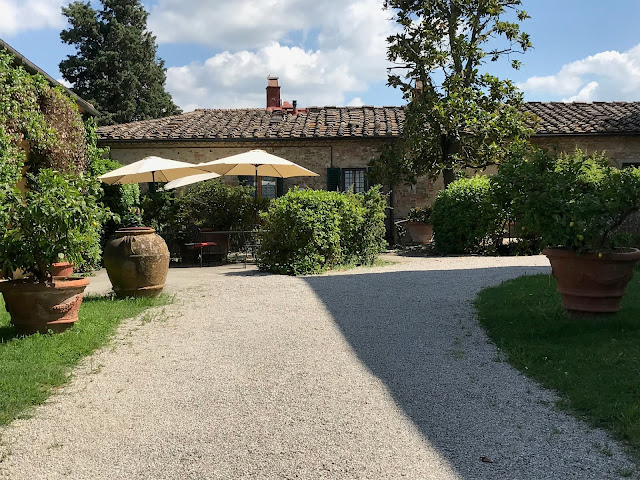 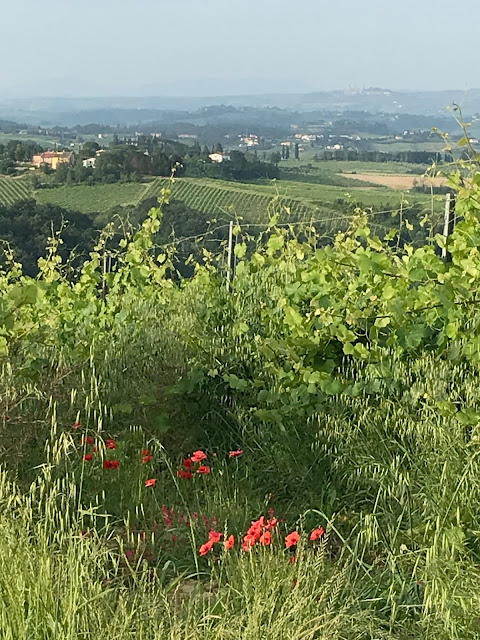 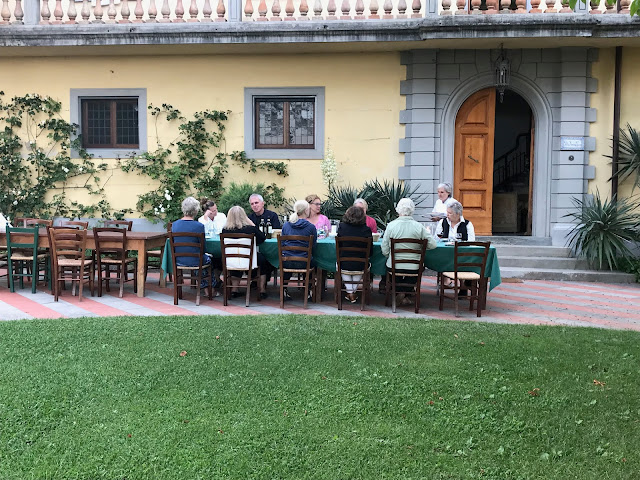 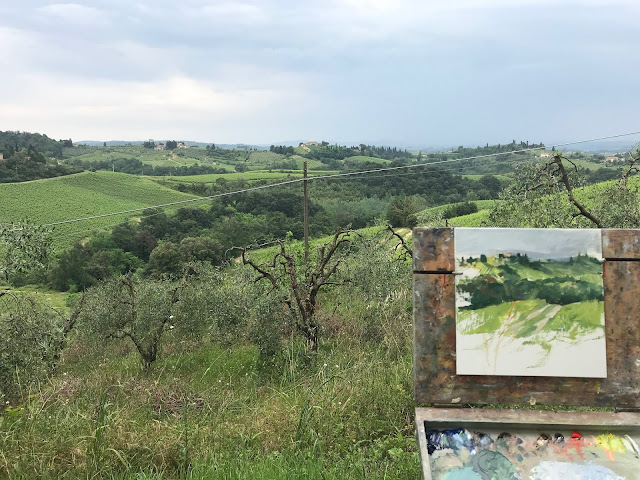 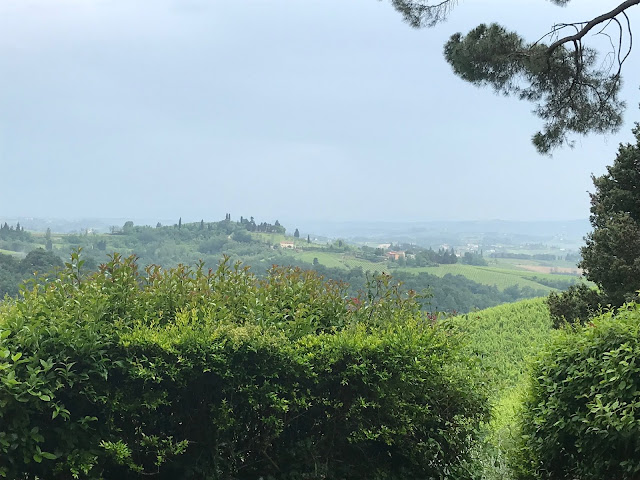 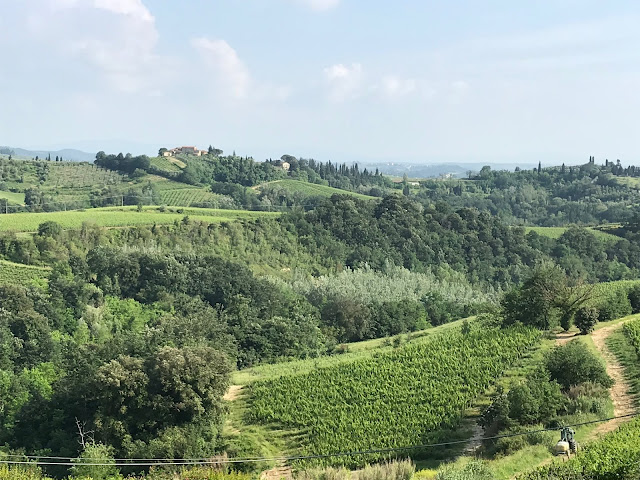 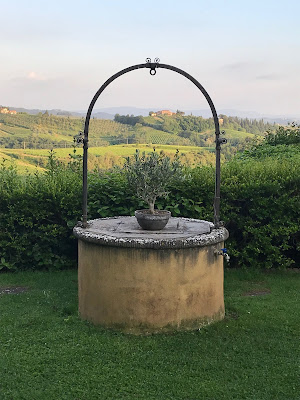 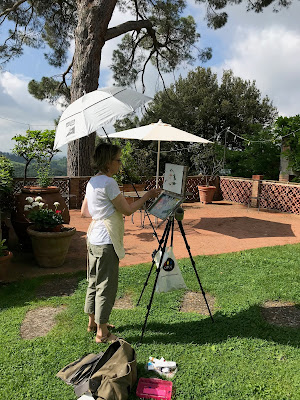 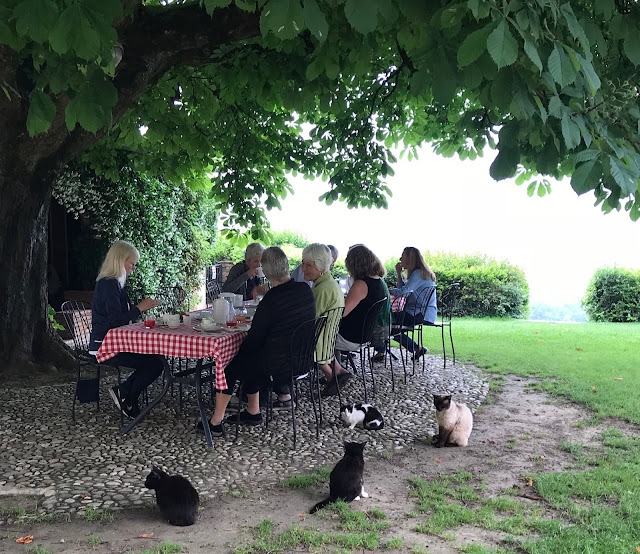 A FEW BITS OF NEWS

I have just learned that High Oaks Farm,18x18, was awarded 2nd place in the
Boldbrush Competition in August.  Thank you to the judge, Tony Pro.High Oaks Farm is
available at the West End Gallery in Victoria:  http://www.westendgalleryltd.com/ 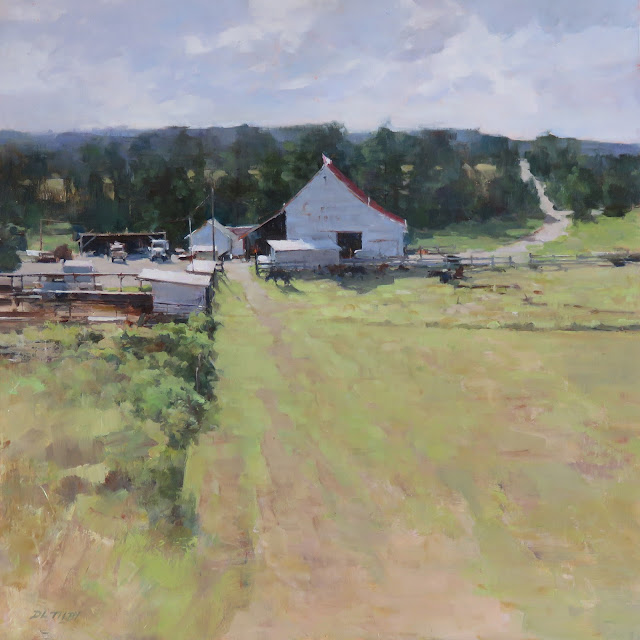 I'm very excited to be invited to participate in the prestigious American Masters Show at the Salmagundi Club in New York City!  The exhibition opens mid October but can now be seen on their website:  http://www.americanmastersart.com/

I have two paintings in the show:   The first is All Tied Up, an oil on panel, 18x24.    As you will have figured out by now,  I love painting old rowboats and was especially attracted to the arrangement these made tied up to the old dock in Ganges on Salt Spring Island. 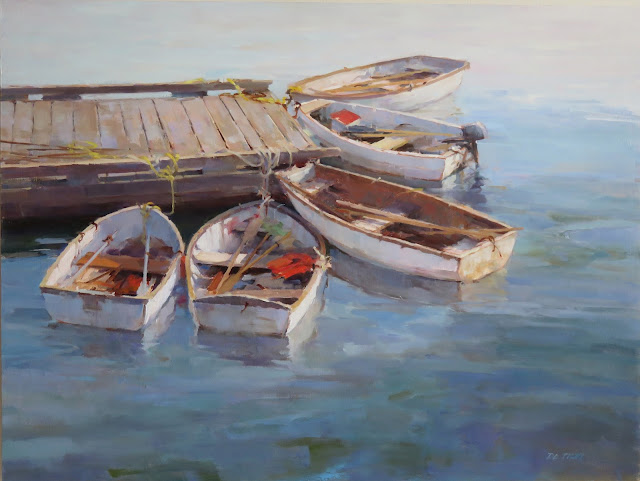 The second one is a small 12x12 oil that I painted from studies done at Oak Bay Marina near my studio early one morning. 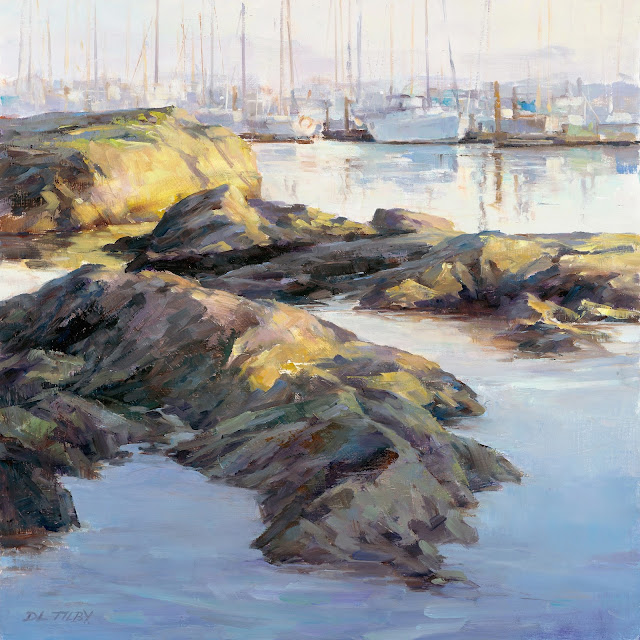 I have been very very pleased to have received a number of awards in 2016 - thought I would post some of the pics:

Most of the time I forget to take pics of my easel in the landscape when I'm out painting and I almost never think to ask someone to take any of me actually painting.  I must try to remember in future.....

But I thought I would post the few that I do have showing just some of the spots my friends and I visited recently. Getting out to paint with these seven friends has become a much valued part of my week.  I have come to really appreciate the fun and friendship I have with them; it is not only great to get out to paint in locations I might not have thought of, it is so good to be able to share my struggles, challenges and successes in a safe, caring and non judgemental group of painters. And we have such a laugh........ 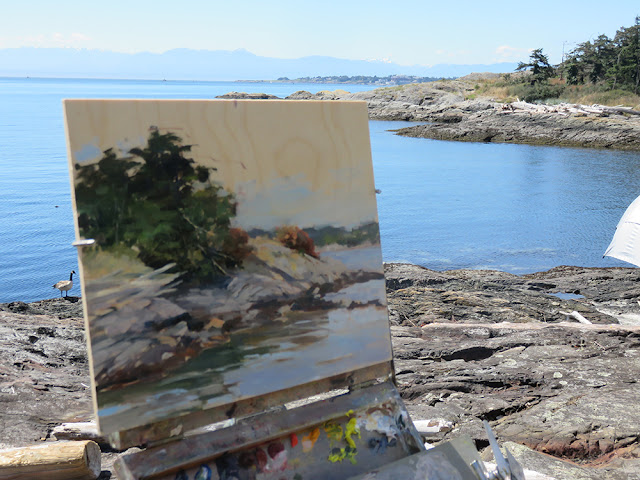 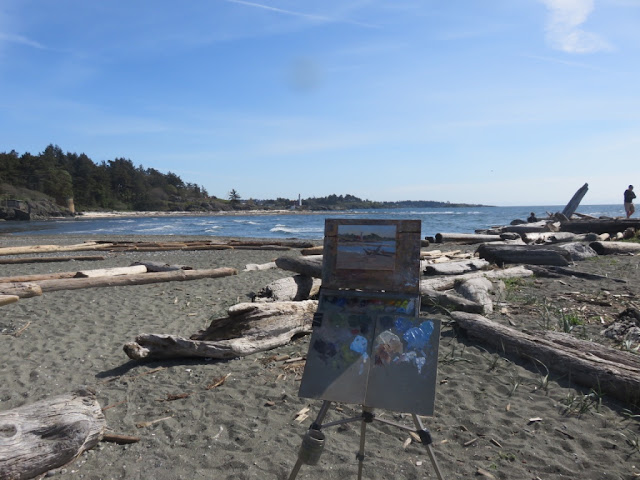 Oak Bay Marina is near my studio and I often head down there for a quick field study or to gather reference for future studio paintings. I recently realized just how many there are and thought I would post some of them here.

As you will see, many of them feature an old blue rowboat whose peeling paint and overall battered appearance really appealed to me. Imagine my dismay when I met the owner of 'my' old blue boat and he told me it had been lost at sea. And...he has replaced it with a newer, stubbier, less interesting boat.  I told him that simply wouldn't do!

The first painting I'm posting is called Over the Rocks, a 6x8 study. Looking through my files I found that I had photographed this one part way through, something that I always intend to do but usually forget. 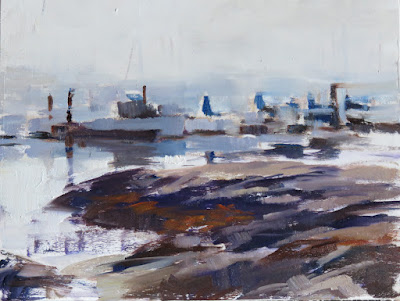 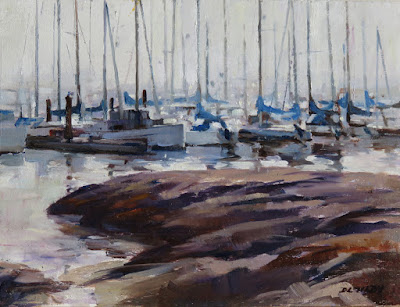 The first two of the next 6x8's were painted with my little pochade box balanced on my knee while sitting on an overturned rowboat or a log. I tidied up the masts back in the studio as I find it isn't always easy to get them in cleanly out in the field. 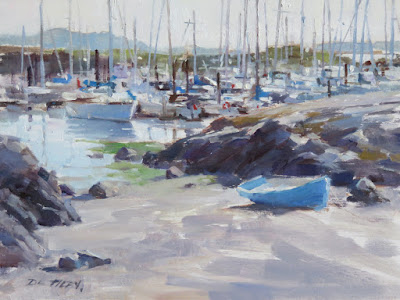 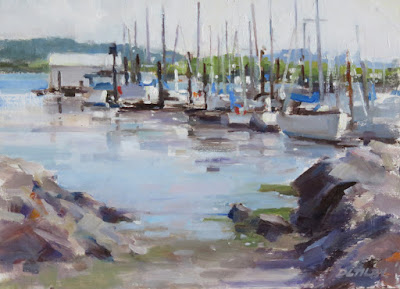 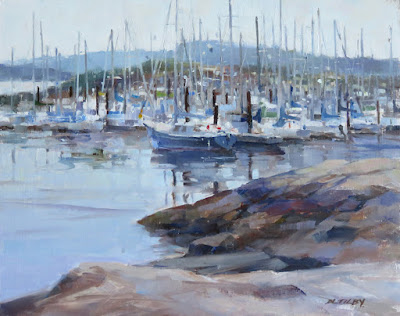 I painted Rowboat at the Marina one morning when out with six friends. It is one of those rare paintings that go smoothly from start to finish. I liked it so much that I did a larger studio piece from the study and some photo reference.


Several years ago I did several larger 24x24 paintings of the blue rowboat and have just recently completed two more.  I had a lot of fun with the first one, imaginatively called Blue Rowboat, playing with a looser treatment and simple colour scheme. I kept the background marina very uncomplicated really using only two colours. I repeated the blues and violets of the background in the rocks and in the boat. 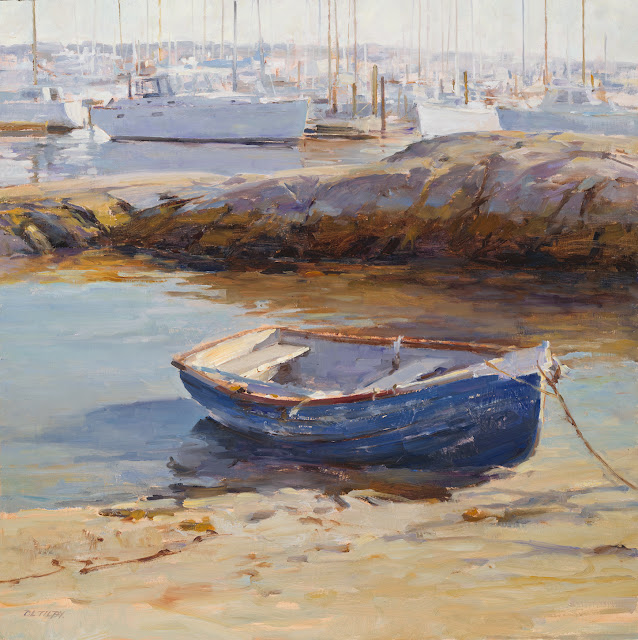 I think the attraction for me in The Bicycle and the Boat, 24x24, was twofold.  The textures on the boat, especially the back area, and the bike up on the bank. I pushed the bicycle back a bit to increase the sense of space and to allow the boat to really dominate. As in almost all my paintings, the painting knives were used throughout.  I think this is particularly evident in the work on the sides of the boat and the rocks. 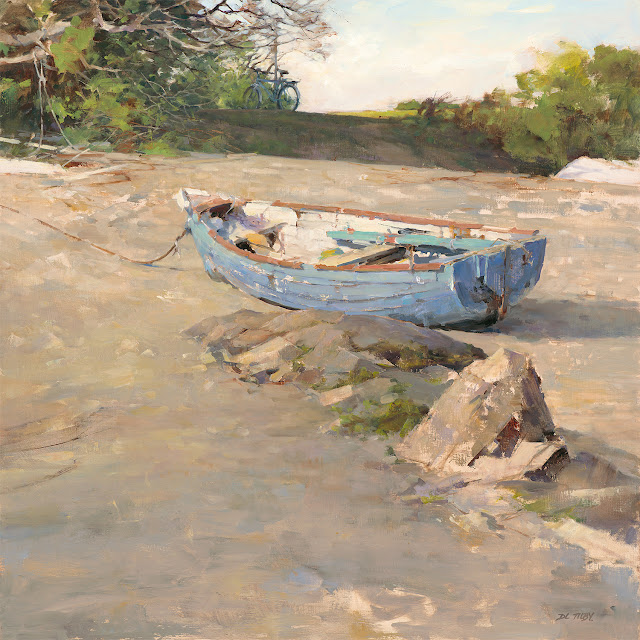 The next blue rowboat painting is Blue Boat Reflected, 24x24. This one is divided into three horizontal bands which could be problematic but varying the width and value of the bands allows it to work. I like to have areas of thin, even scratchy, paint along with thicker brush or knife work. I make use of the painting knife in various ways - in the bushes I alternated between laying in colour with a brush and 'messing' it up with the knife and applying paint with the knife and cutting back in with the brush.  I also used a knife to scrape paint away to create textures and to thinly apply paint in a scratchy way as on the boats and the grasses. 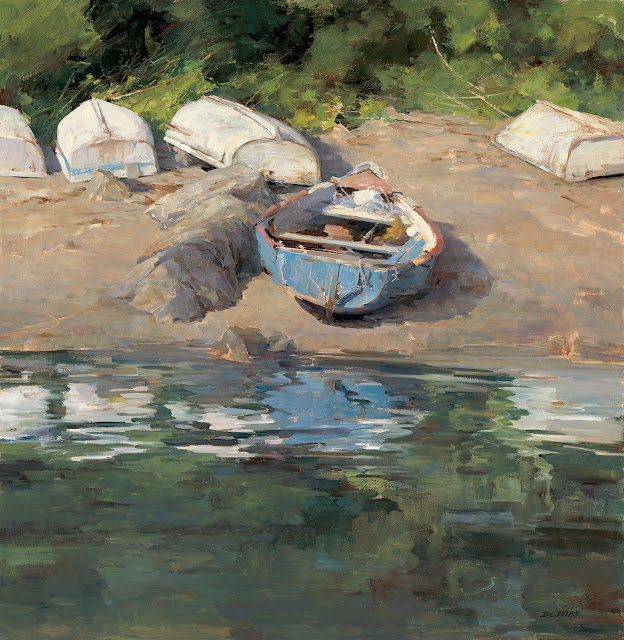 And the last one in the blue boat series is called White Boats on a Beach, 18x24.  The central boat is the one that replaced my dear old blue rowboat. In reality it is bright blue and very bright yellow, has a snub nose and is rather squat in appearance. But its position on the beach in relation to the others and the lighting appealed to me so I decided to use it but change its appearance. I elongated it, added the pointy front making it more like my old blue rowboat and put some oars and 'stuff' inside it. My first intention was to make it blue but I felt it worked better in this instance to keep all the boats white. 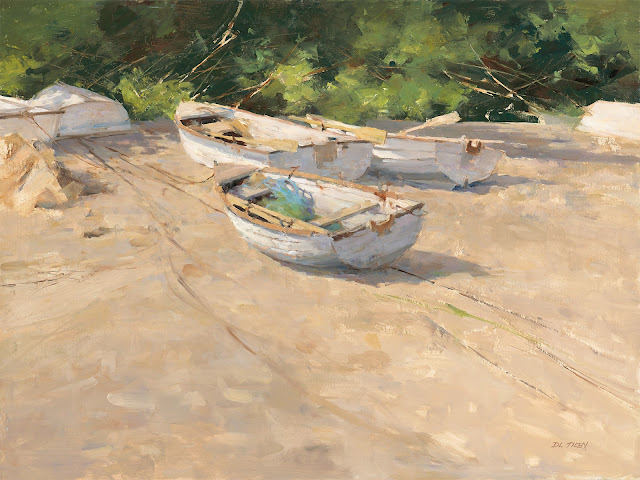